Visit Boston – what and where to eat

When you come to Boston there are at least two specialties you need to try:

A thick soup made with clams, onions, potatoes and heavy cream. Recipes vary so as to include salt pork or bacon, as well as chicken stock. The result is a delicious creamy concoction generally served with oyster crackers.

Where did we try it?

For lunch we went to the Boston Sail Loft; a cute, unpretentious waterside restaurant that serves an extra-thick clam chowder sprinkled on top with a generous amount of dill. It is said to be the best chowder in Boston. 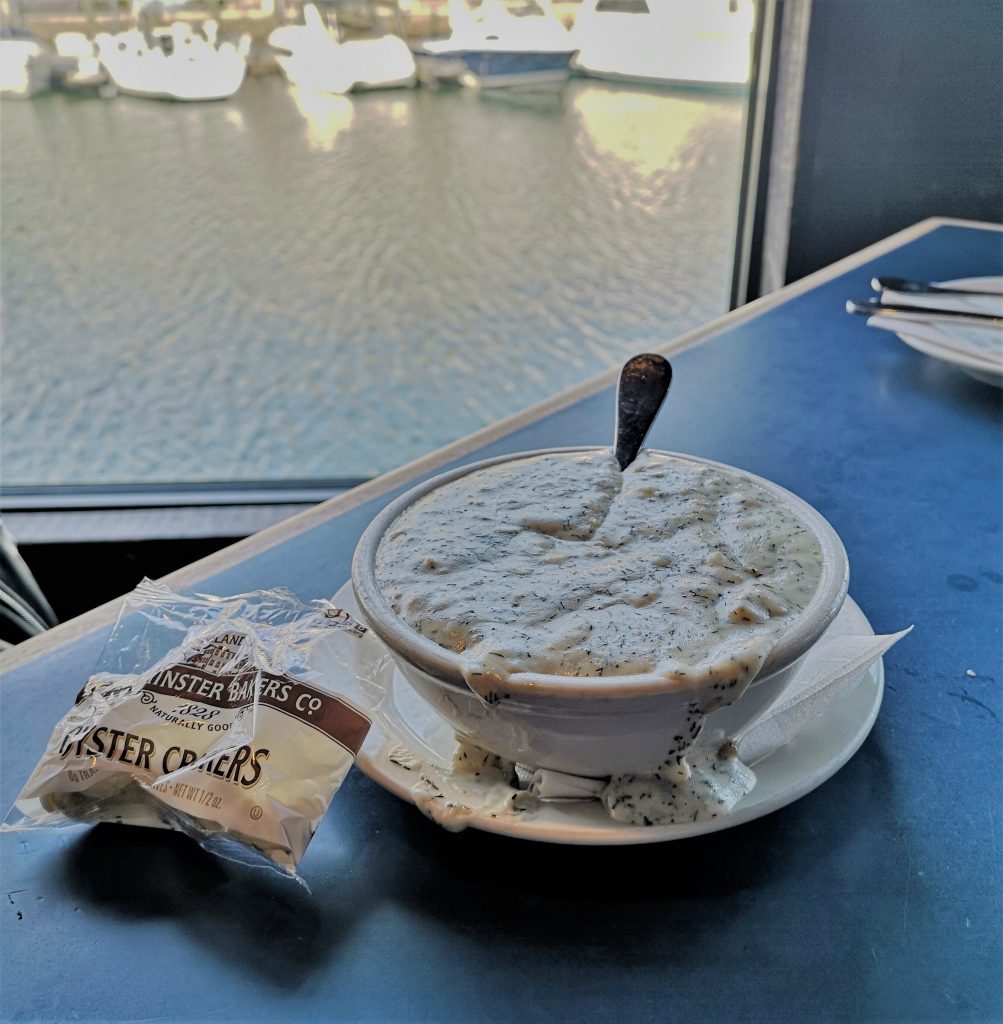 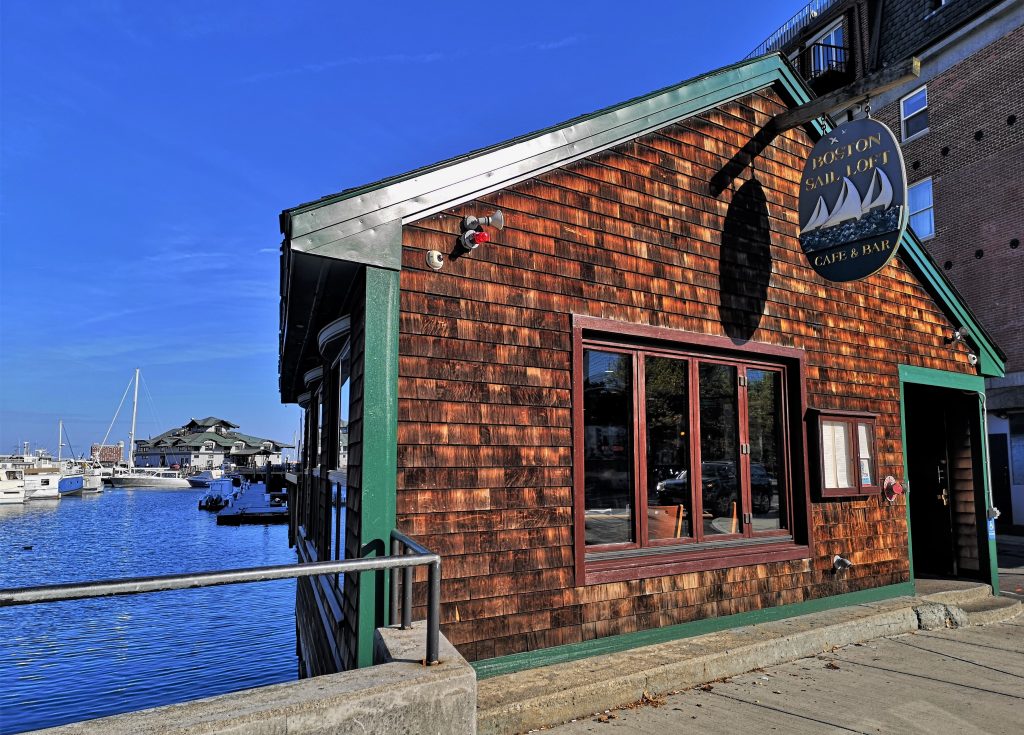 For dinner we headed to the Atlantic Fish Company. Much less creamy, with potato cubes left slightly chunkier, some would say the clam chowder served here is probably “cleaner” and more refined. 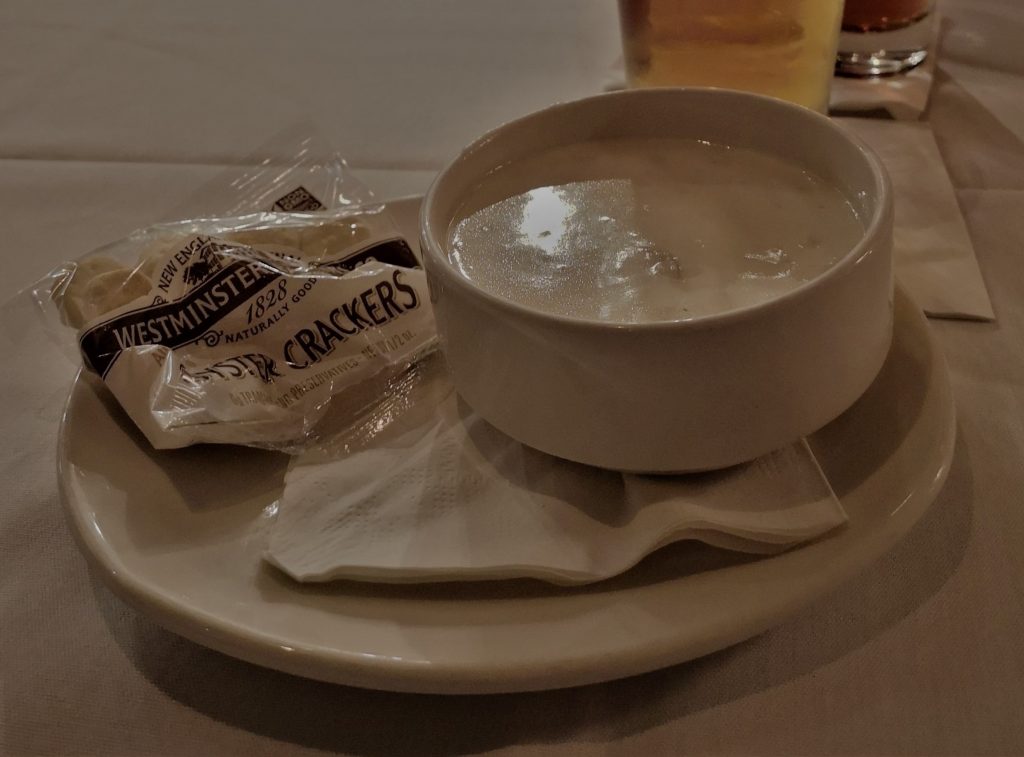 The restaurant is indeed an elegant, pricey venue located in a central area; it was packed-full with guests, lined up at the counter or seated at dining tables. With the chowder we ordered a couple of starters: bacon-wrapped jumbo George’s Bank scallops with maple-mustard sauce and fried oysters with cajun remoulade. No complaints!

There’s not just clam chowder in Boston, quite obviously, so you may want to try other seafood in the form of a “comforting” fish and chips or fresh oysters or a good old lobster roll. Read where we’ve found the best lobster roll in neighbouring Connecticut.

Oh my! Where to start? Boston has seen an influx of immigrants from Italy since the late 19th and 20th centuries. Irradiating from North Square in the North End, the Italian community has “colonised” the city and brought its culinary tradition with it. But there’s mainly one specialty you really need to try: cannoli.

A Sicilian creation made of a crunchy cylindrical shell filled with sugared ricotta cheese and garnished on both ends with chocolate chips (or pistachio crumbs), cannoli are simply delicious. In Boston you can try different variations on the theme but you can almost never go wrong if you try the basic version.

Where did we try it?

We said “almost” as we’ve tried cannoli from four different bakeries (the fifth one, Maria’s, was closed) but only, deeply, fell in love with two. One was a classic cannolo served at Modern Pastry; the second one was an incredible, extra-crunchy, yet caramelly-chewy, florentine cannolo found at Mike’s. Florentine is a sweet pastry made with honey and almonds or hazelnuts. 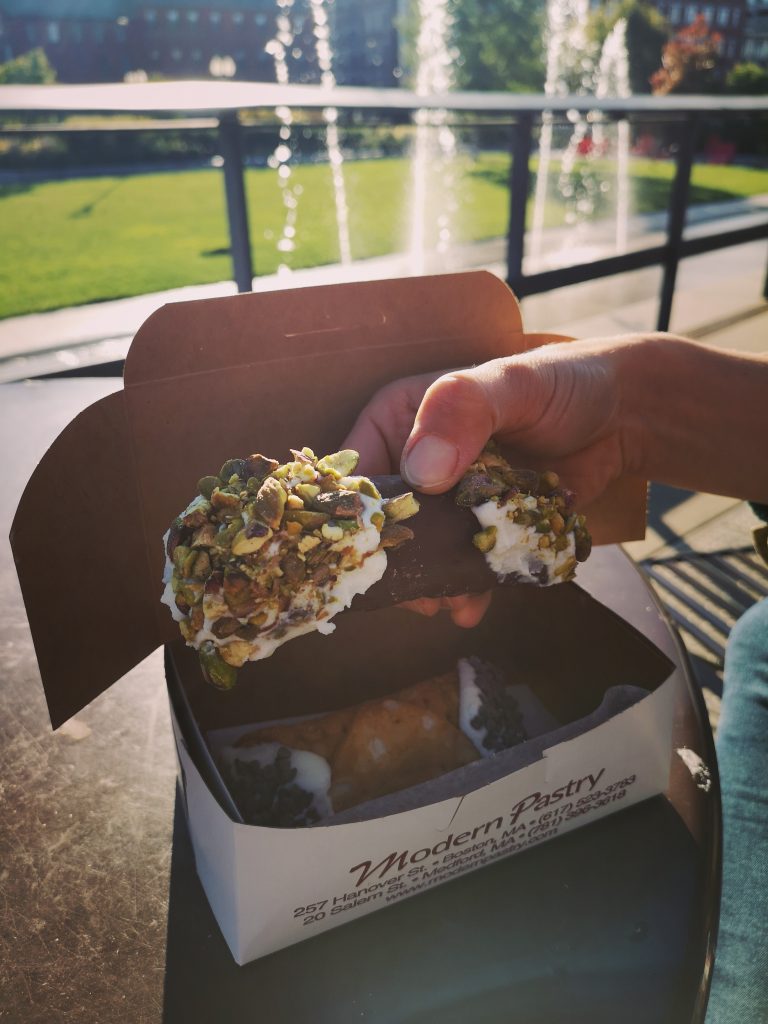 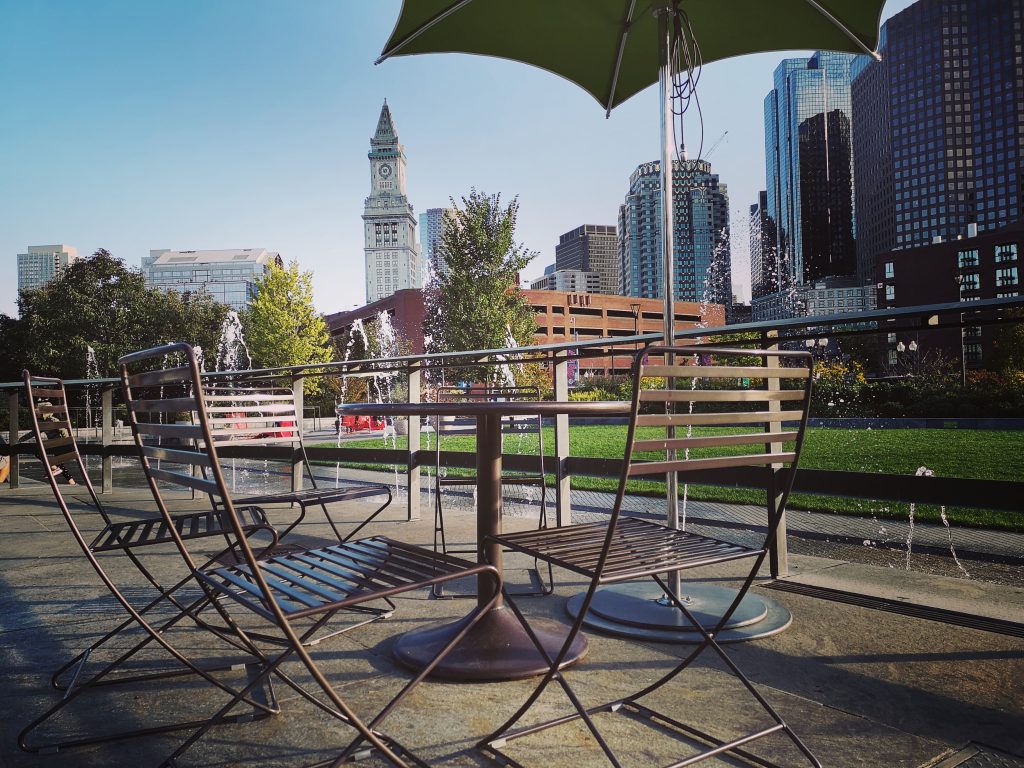 To make your experience even more unique, order the cannoli at the counter and then head out to find a cool spot where to enjoy those crunchy bites of heaven. We suggest the Rose Kennedy Greenway, a contemporary 1.5 mile-long public park winding its way up on the eastern side of Boston; the peaceful St. Francis of Assisi Garden (more like a paved terrace) hidden just behind Old North Church; or the Cambridge Parkway, on the northern bank of Charles River, for views on the Boston’s skyline. 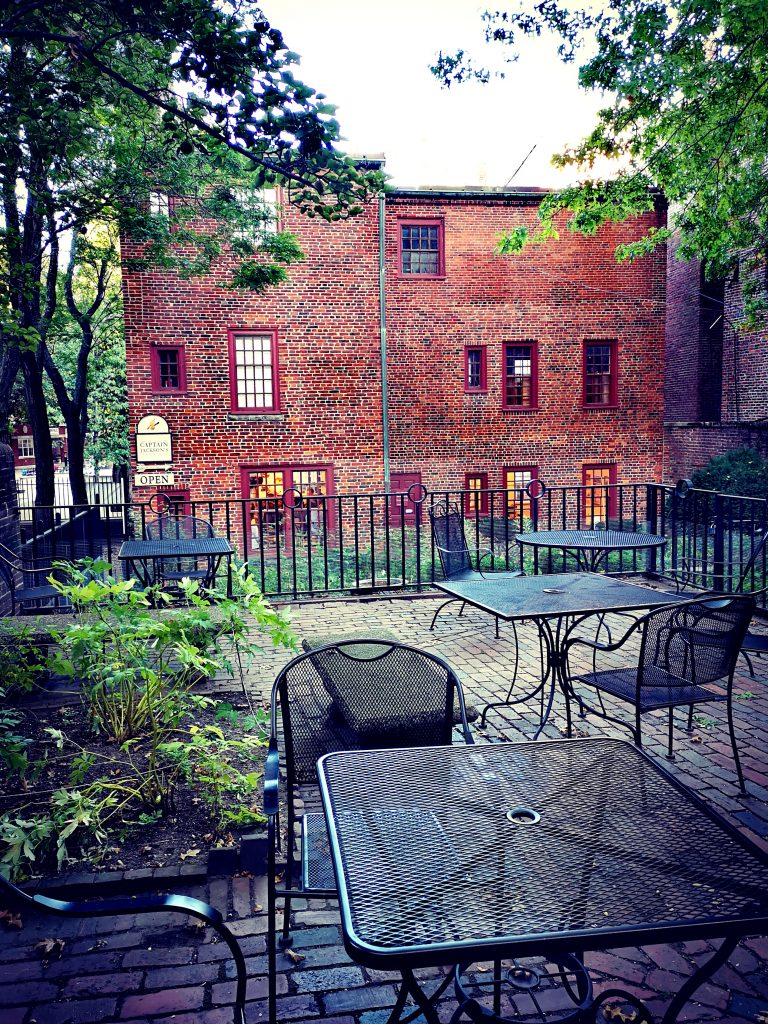 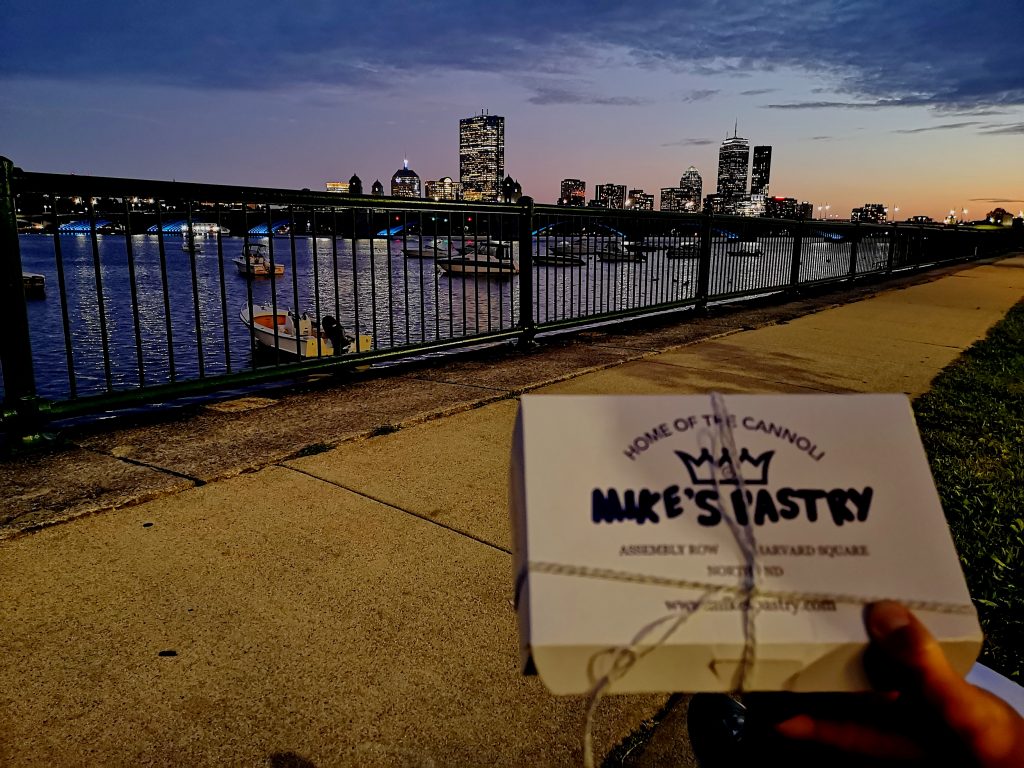 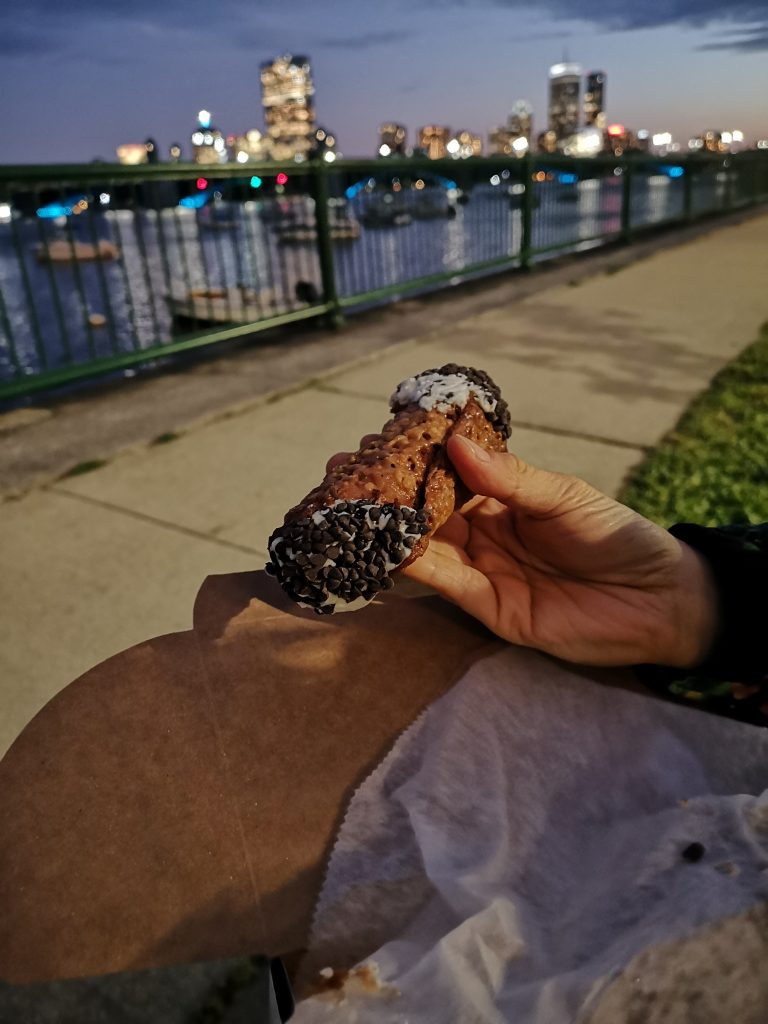 Another typical Boston dessert is the Boston cream pie. Mistakenly referred to as a pie, it is a sweet, buttery sponge cake which, in the Bostonian tradition, is filled with a layer of vanilla custard and covered with chocolate glaze. We did not have the chance to try it but it’s easily found in almost every bakery. Blackbird Doughnuts serves it in the shape of a smaller, round doughnut (therefore fried) called the Boston Cream Bismarck. The Bismarck is a Berliner (otherwise known as krapfen or paczka).