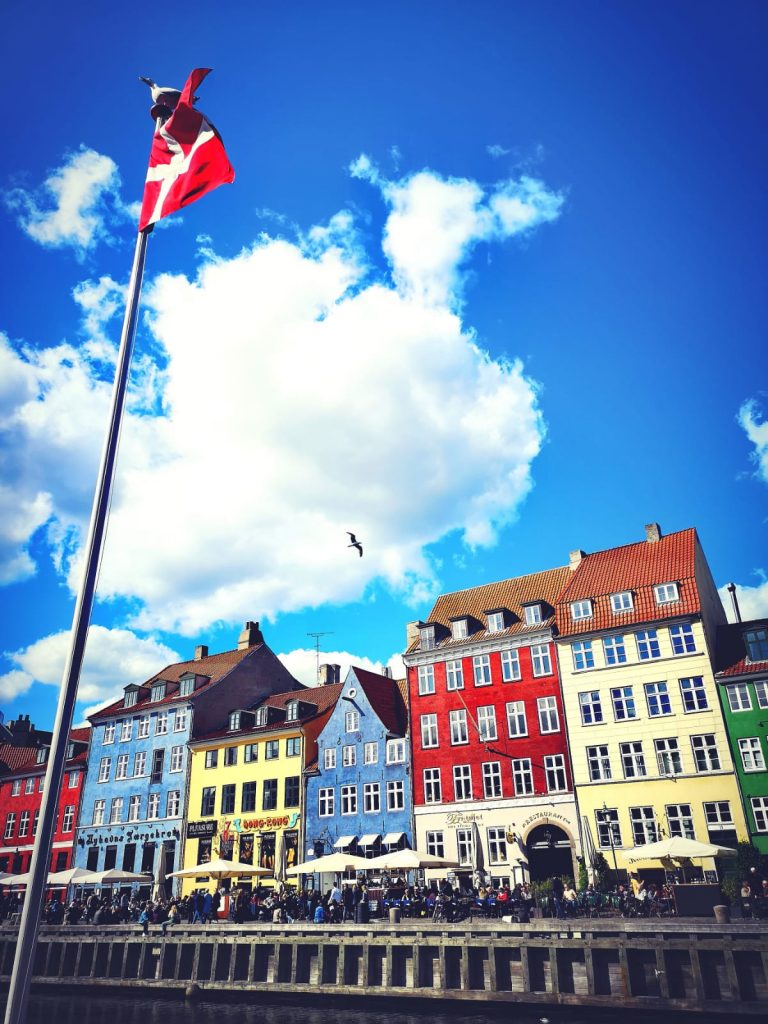 We embarked on the ferry headed to Svendborg from Ærøskøbing (approx. 75 minutes). There are several ferries serving the island every day of the week. Here’s a list of possible options. The tickets are only sold as return tickets, therefore it is more convenient to depart and return from the same location. If you’re travelling by car, it is recommended to make a reservation and to be on time (10 minutes before departure).

From Svendborg we drove to the capital København (Copenhagen) crossing the Storebæltsbroen, the long bridge that connects the region of Funen to Zealand, Denmark’s largest island. 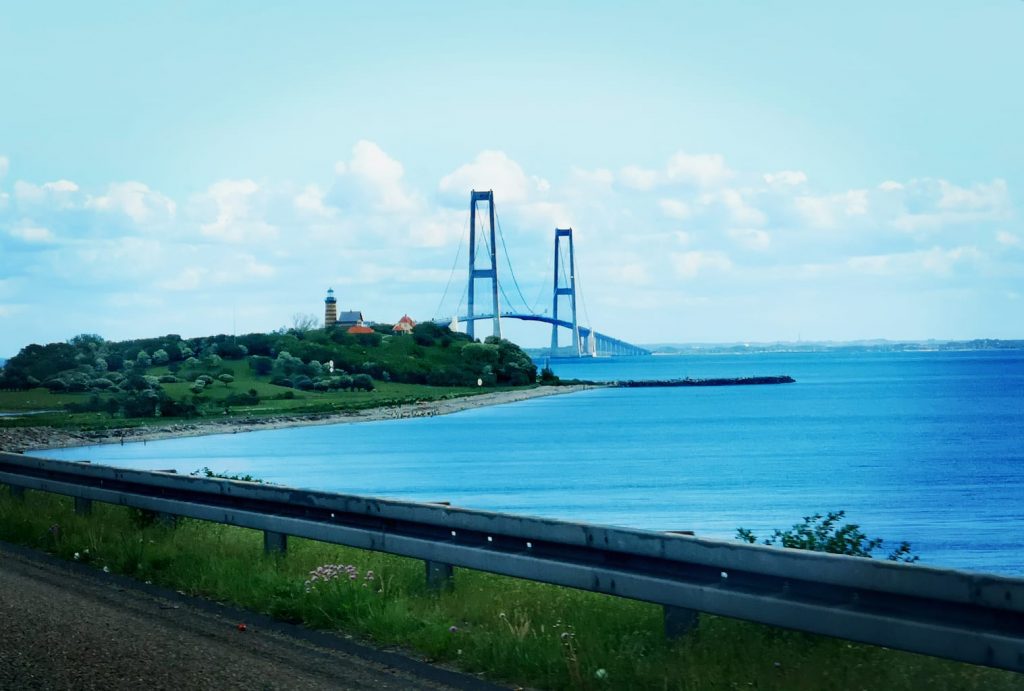 After returning the car – short digression here: I don’t know whether we send out a particularly trustworthy vibe or whether Danes are simply very relaxed, or both, but the only question we were asked by the Europcar staff was if we had replenished the tank with fuel, “yes”, “then you’re fine!”. Digression to the digression: we did purchase the full cover insurance so, either way, we would have been fine, but still, we were impressed by the unfussy attitude.

Finally car-free – and in Copenhagen it is vital as bikes own the streets and it is painstakingly difficult to drive around, – we explored the city trying to see as many things as we could profiting from May’s long hours of daylight and the nice weather.

A quick note on bikes.

Pay attention when getting on and off buses as you’ll be treading in bike territory. To our surprise there were no zebra crossings on bike lanes in proximity of bus stops and pedestrians just had to be extra careful and watch out for incoming bikes. Likewise, if you’ll be driving central Copenhagen, you may find quite annoying and somewhat dangerous that, when trying to turn left or right, you’ll have to give priority to bikes. They don’t have a “stop” sign and traffic lights are only placed in major crossroads.

We started off from Rådhuspladsen (the town hall square) not after having skirted the north perimeter of the famous amusement park Tivoli Gardens and heard its screaming visitors.

We walked our way eastward to Kongens Have (King’s Garden) – the oldest park in Copenhagen – and the adjacent summer residence, Rosenborg Slot. The latter was built in the early 17th century in Dutch Renaissance style at the order of King Christian IV. 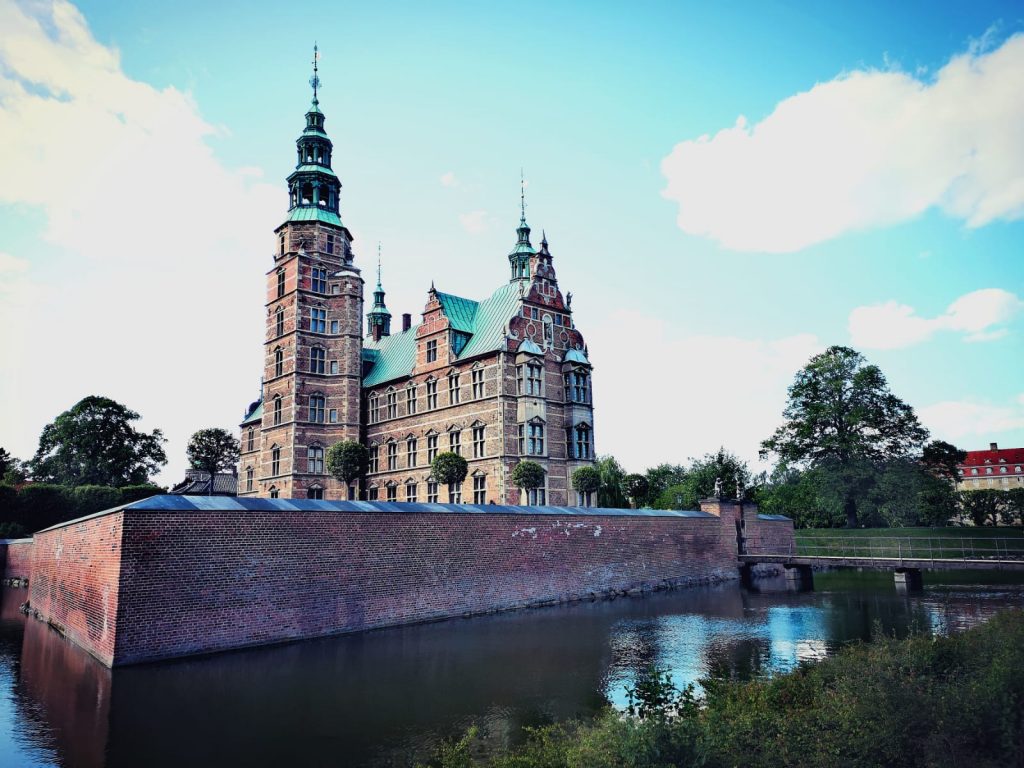 As we were walking along Strøget, a central pedestrian-only street that runs from Rådhuspladsen to Kongens Nytorv (“The King’s New Square”)we had to stop at iconic Nyhavn, a canal built to connect Kongens Nytorv to the harbour, famous for its colourful gabled town houses. The beloved Danish author Hans Christian Andersen has lived here for some time at number 18, 20 and 67. 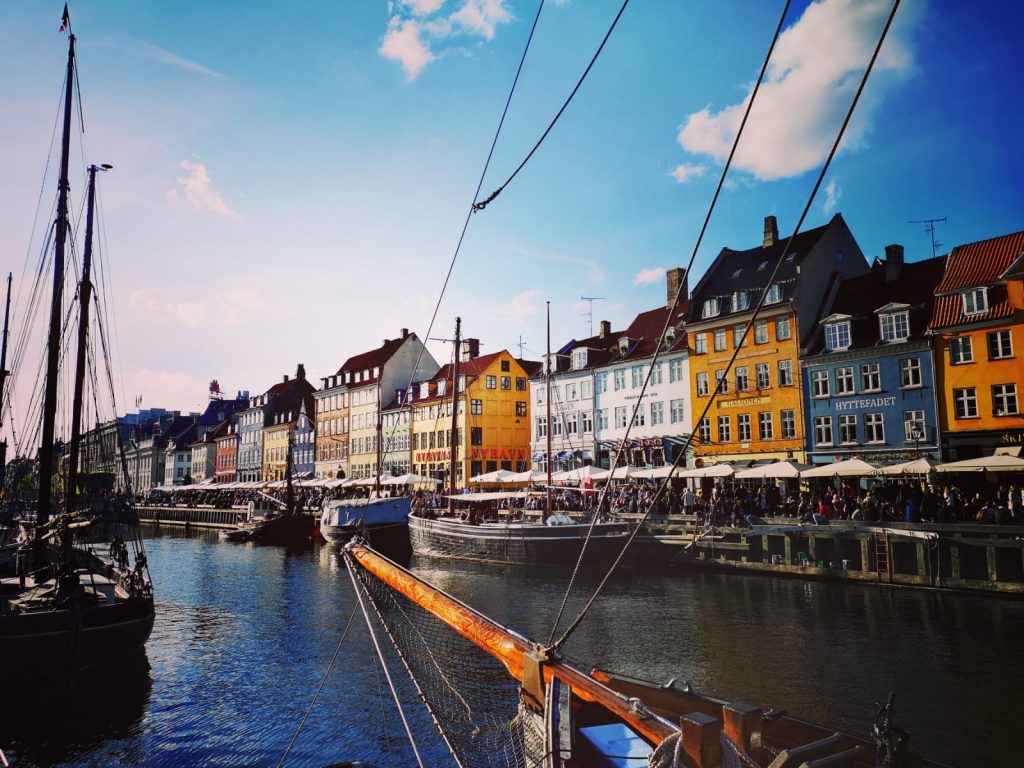 Before turning left to reach Kongens Have, we stopped at neo-baroque Marmorikirken (or Frederikskirken) with its impressive dome inspired by St Peter’s in Rome and the largest in Scandinavia. A few meters away, on Bredgade, is the Russian Orthodox St. Alexander Nevsky church notable for its characteristic Russian Byzantine style and commissioned by Tsar Alexander III who had married Princess Dagmar of Denmark, in one of those weddings designed to cement international relations with other kingdoms. 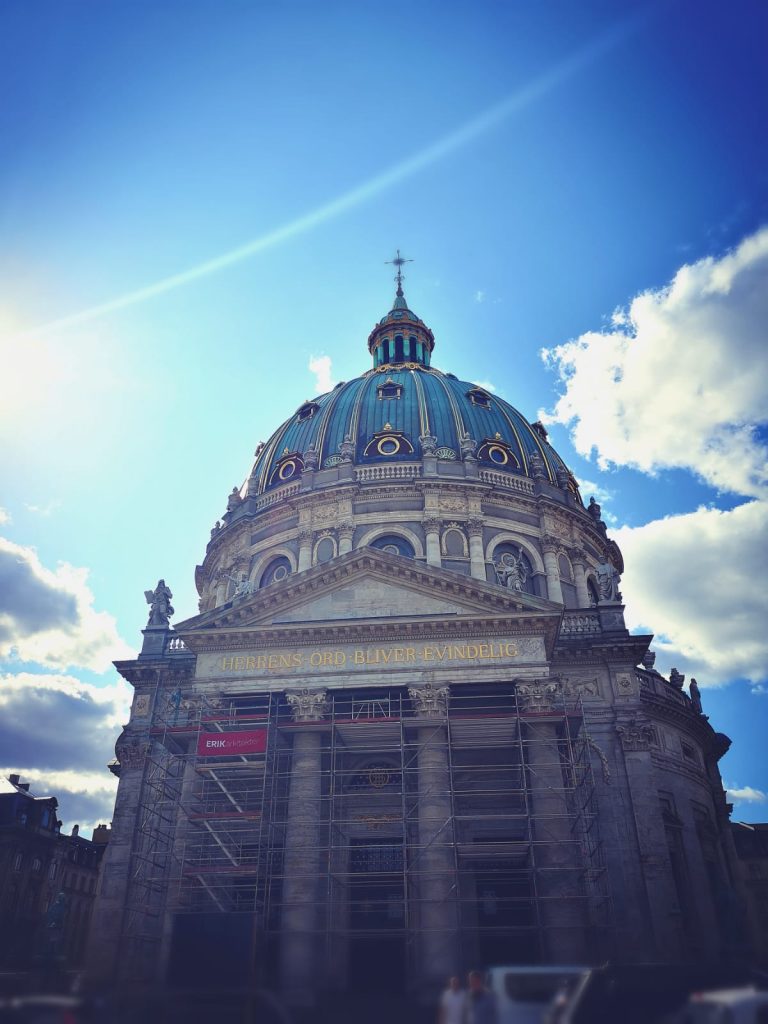 The first part of our expensive but tasty dinner was served by Torvehallerne KBH market and food hall, close to Nørreport Station, where we chose a fish-based platter accompanied by mixed salads from fishmongerHav2Go. We ordered some pastries too from Laura’s Bakery and had one, the tebirkes, while sitting on the grass of the near Ørstedparken, looking into the waters of its small central pond. 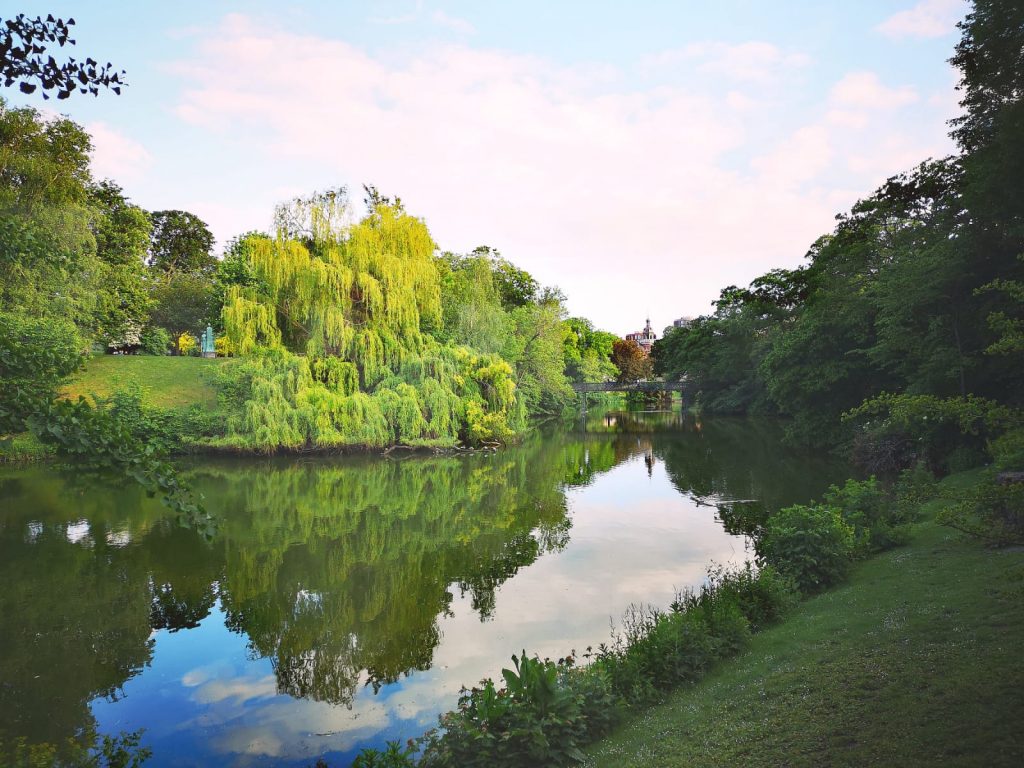 While walking our way back, we took pictures of the Slotsholmen, a complex of buildings that stand on an island separated from the rest of the city by a moat-like canal. At its centre is Christiansborg Slot, previously built as a royal palace under Christian IV, it’s now home to the Danish Parliament (Folketinget). Not far, on Børsgade, is Børsen, Europe’s first stock exchange, a beautiful Dutch Renaissance style building notable for its 56m-tall spire made from the intertwined tails of four dragons. 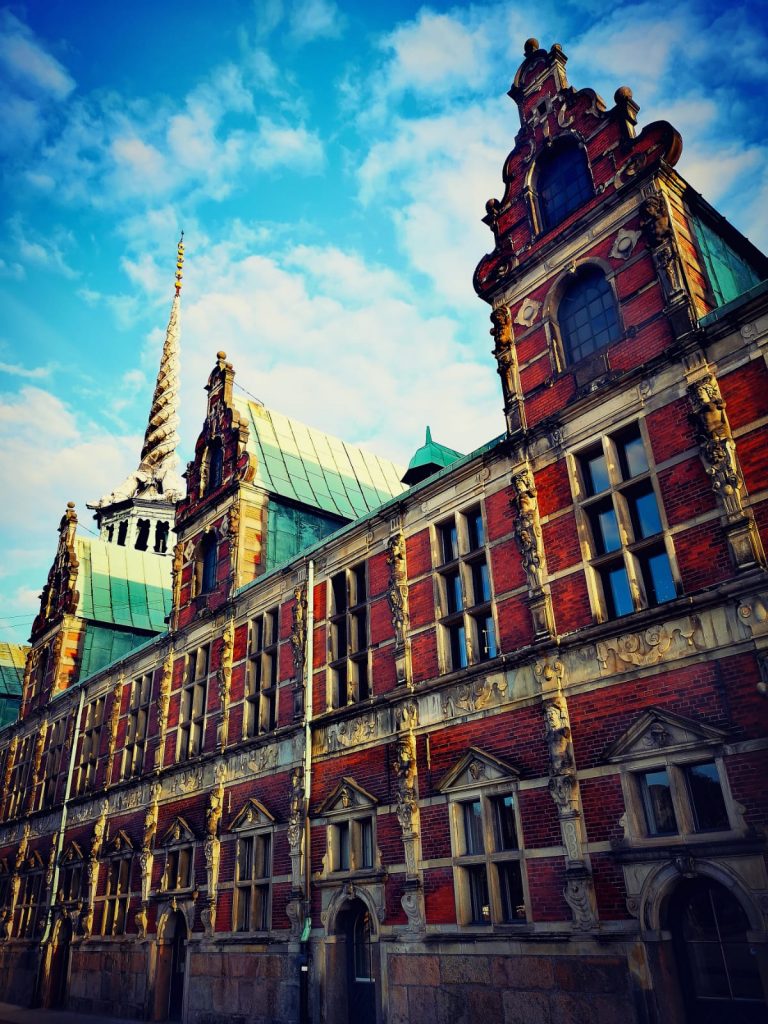 The second part of the dinner was in hip Kødbyen the Meatpacking district in Vesterbro, where we had tasty hot dogs at John’s hotdog deli.

Copenhagen Card in “hand” (well, a digital card accessible from our phones really!), we faced a rather gloomy day by visiting museums.

Read more about the 87 attractions and public transportation included in the price of the Copenhagen card here.

We kicked off with Christian IV’s summer house, otherwise known as Rosenborg Slot. The visit covers four levels (no step-free access) which feature a vast collection of furnishings and royal regalia – including the precious Crown jewels in the basement – made from various materials (glass, ivory, gold, even narwhal tusk).

Buy your ticket online and get it straight to your phone, or print it from your email.
Online purchase will assure you entry at your desired time, and you won’t need to begin your visit in the ticket office. 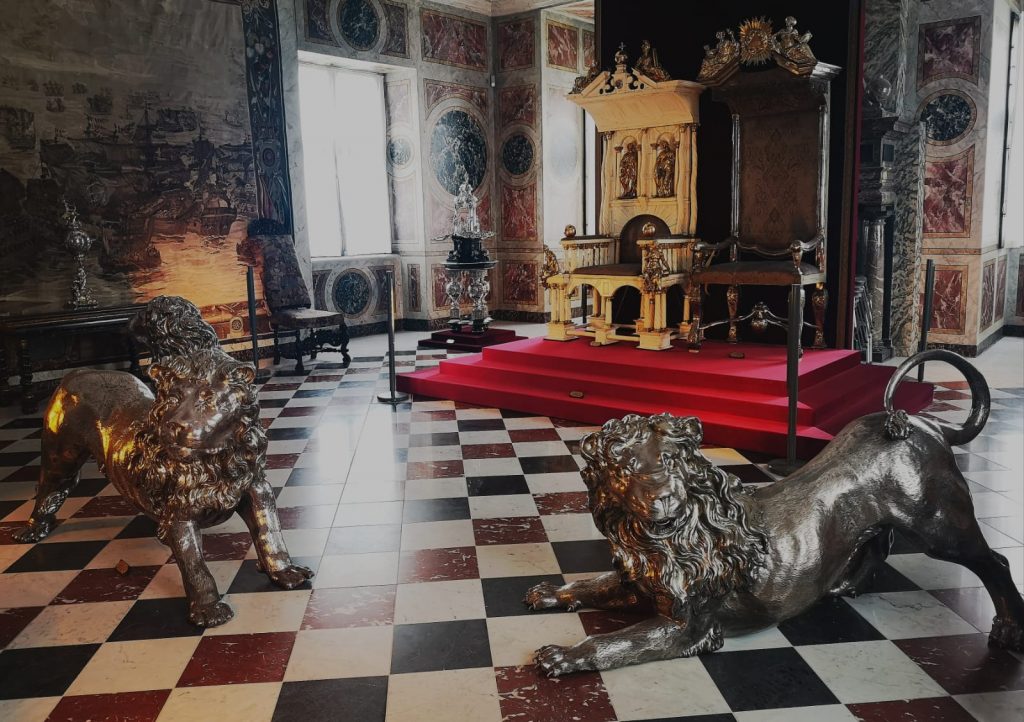 Before entering the building – as there is an allotted time for each group of people to be let inside – we crossed the road and briefly walked around the Botanisk Have (botanical garden) where a butterfly displayed a peculiar affection for Claudia’s pink hair. 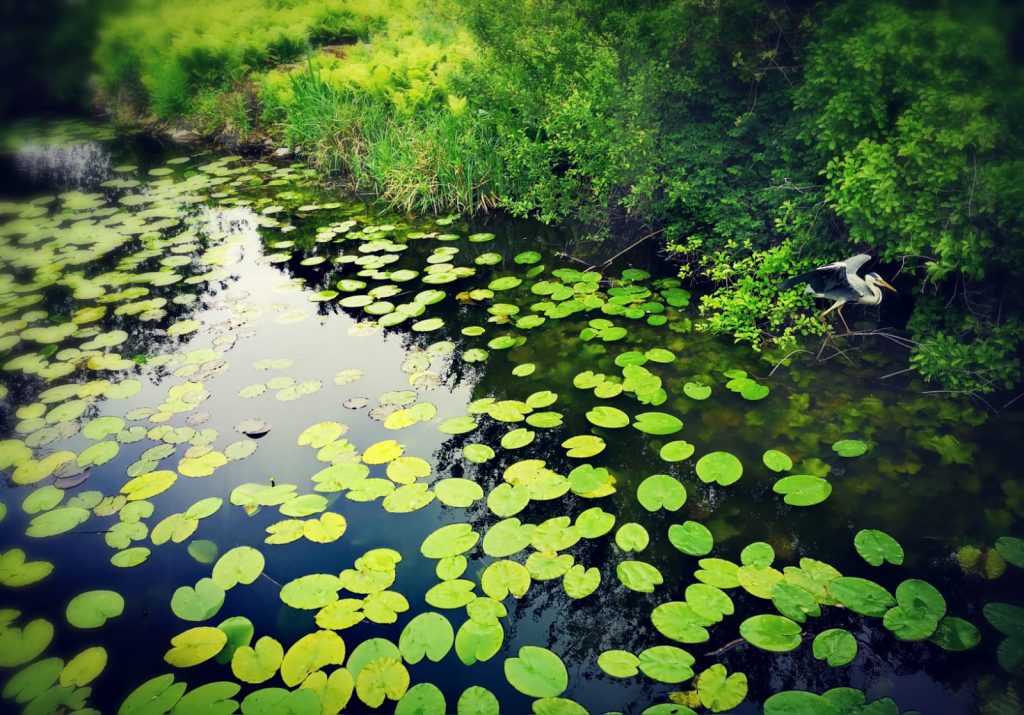 Next on our list was close-by SMK – Statens Museum for Kunst, the National Gallery featuring works from European and Danish artists ranging from the Middle Ages to the Renaissance, as well as modern and contemporary paintings and art installations. For a list of upcoming exhibitions click here. 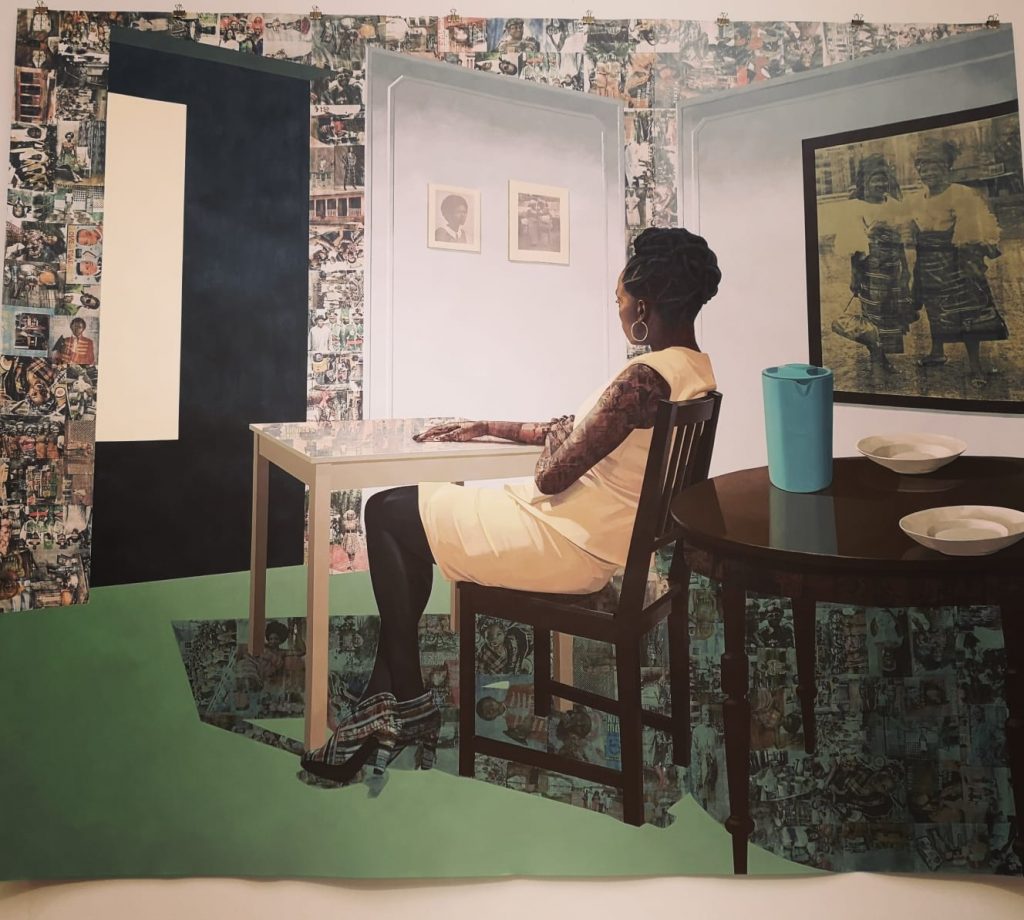 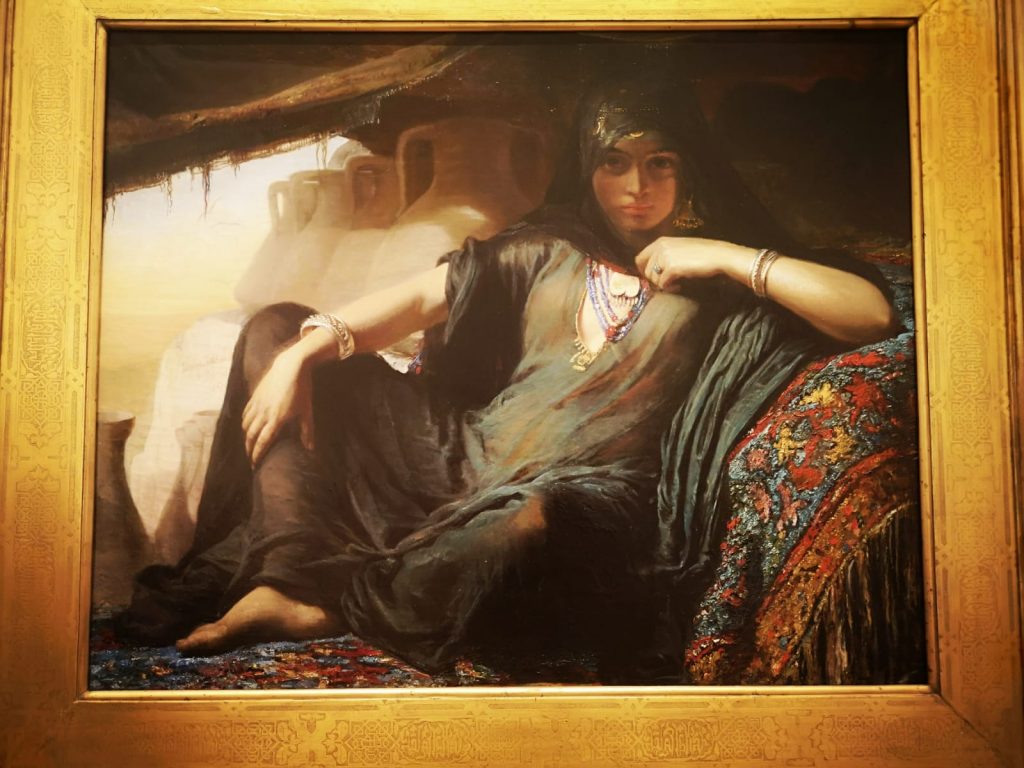 Moving south, we entered a church-turned-art centre, Nikolaj Kunsthal which, at the time of our visit, hosted a performance art piece by Andreas Emenius and an exhibition by Anna Domnick (“It’s all white”) focused on the Greenlandic landscape as examined by a group of researchers the artist had followed. Check the updated list of exhibitions here.

In the Latin Quarter we climbed up 34.8m-high Rundetårn (Round Tower), built in 1642 by King Christian IV to serve as an astronomical observatory for the famous astronomer Tycho Brahe. From the top you can enjoy a 360-degree bird’s-eye view of the Danish capital. 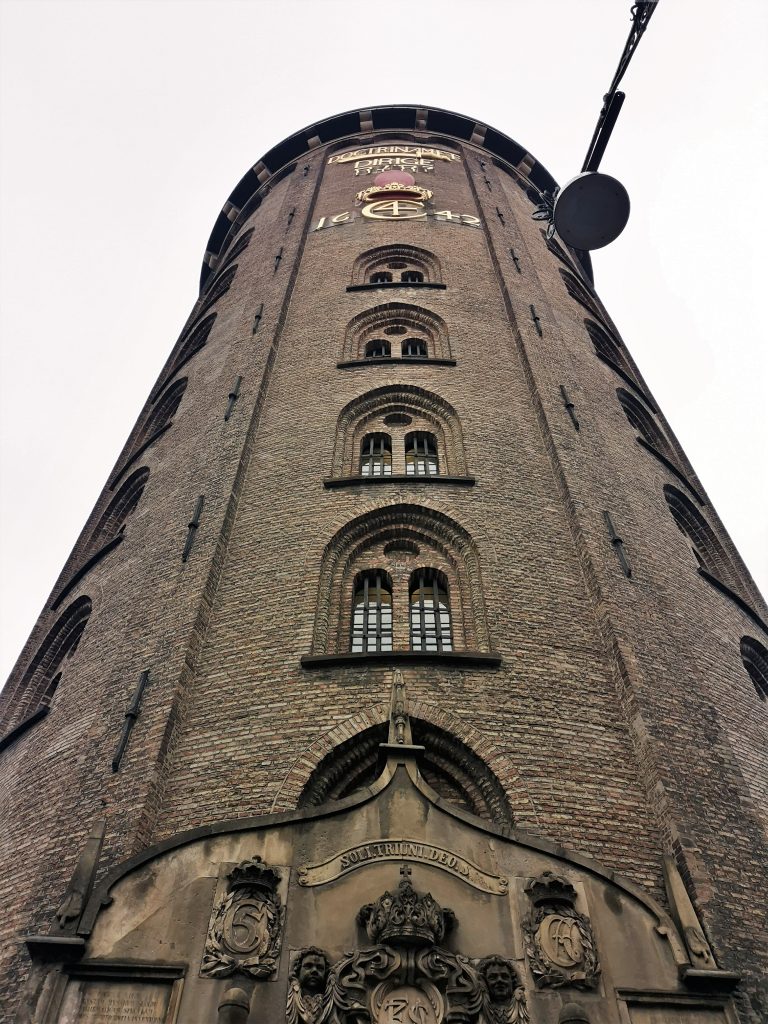 The last stop before dinner was at Christiania, an independent community founded by squatters in 1971. It is located on the eastern side of Copenhagen, in the borough of Christianshavn, established in 1617 by King Christian IV. The police had tried to regain control of the area, which was formerly an abandoned military camp of unused empty barracks, but the various attempts proved unsuccessful. Accepted initially as a “social experiment”, in 1989 the government has recognised its semi-autonomous status. Nevertheless the relationship with Danish authorities has always been undeniably rocky, especially due to the selling of drugs, culminating with a shooting in 2016 during which three people were injured including a police officer. Please be advised that you are not allowed to take pictures or film in the drugs-selling area (Pusher Street). 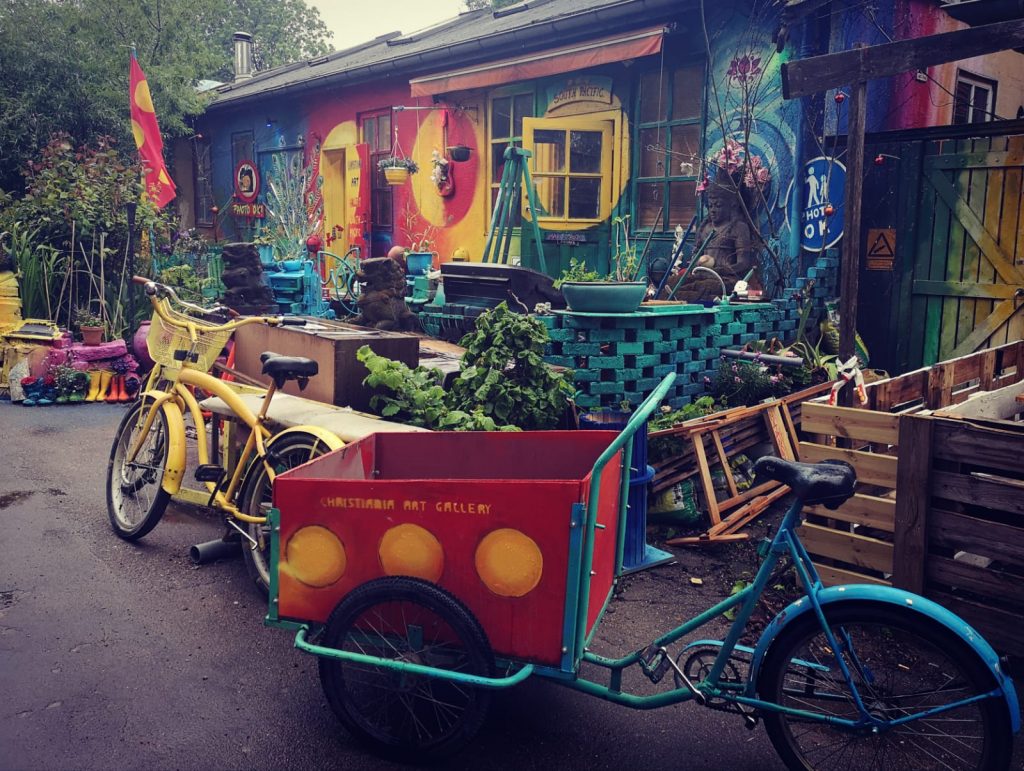 Aside from the problematic business of the drug-dealing ventures – now mostly run by non-residents, – non-conformist humans let their hash-infused spirits free to express themselves in this coloured, self-sustaining enclosure. As you stroll within Freetown Christiania, be amazed by the quirky-verging-on-the-creepy art installations and the colourful mosaics; watch out for the famous (and expensive!) Christiania cargo bikes and grab a bite to eat at one of the many eateries. Here‘s a list of the ten best restaurants found within the community according to Culture Trip.

Funnily enough, one of the most celebrated restaurants in the world, the Noma, stands at the very northern border of Christiania. It’s quite the sheer contrast.

For our dinner we opted for Reffen Copenhagen Street Food , an open-air food hall vowed to sustainability and seasonality with over 50 coloured food stalls and bars offering anything from Nepalese to Mexican food and the most traditional Danish staples. We opted for the latter ones and tried the smørrebrød by S’morebread (traditionally a slice of rye bread topped with fish, meat or veggies accompanied by sauces) and hot dogs by Nordic hot dog (served with crunchy onions as in the nordic version, or pickled cucumber and apples in a more Danish style). We washed all down with some sturdy, local craft beers.

A beautiful sunny day in Copenhagen called for an outdoor adventure. The weather forecast completely threw us off as it was supposed to rain and we had to cancel our plan to cycle up north. As such we did not experience what it means to rent a bike and cycle within Copenhagen.

We consoled ourselves with some mid-morning pastries from Hart Bageri and Meyers (once again you will find recurrent flavours such as marzipan, cinnamon, cardamom, cream, giving texture and character to a crispy yet soft croissant-like dough).

Our first cultural stop for the day was at Christiansborg Slot: the site of the very first settlement in Copenhagen, Bishop Absalon’s Castle, dating 1167, its current name derives from Christian VI who built the first Palace in the early 18th century on the foundations of a previous Copenhagen Castle. Due to two big fires, in 1794 and 1884, the building had to undergo refurbishments and reconstructions to gain the aspect it has today.
It is now home to the Parliament, the Prime Minister’s Office and retains its function of hosting banquets and official ceremonies in its sumptuous interiors. The visit included a tour of the royal stables, the kitchen, the 11th-century ruins underneath the building and the tower from which you can enjoy yet another aerial view onto the city below. 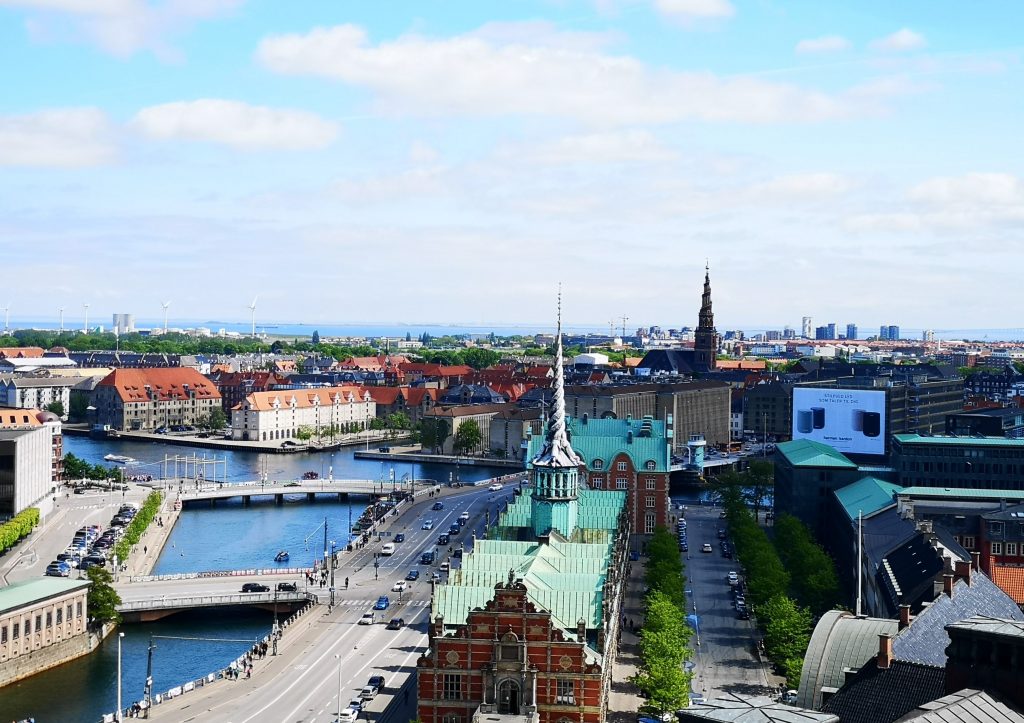 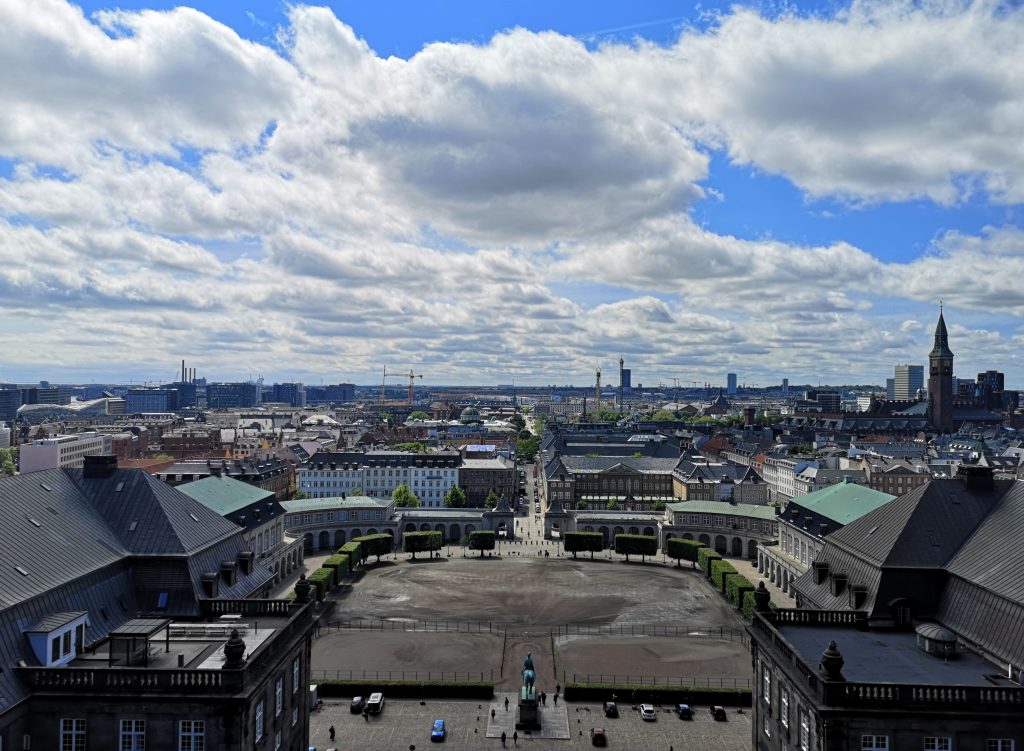 A one-hour canal boat tour (free with the Copenhagen Card) showed us around, from the very heart of the city, as the tour departs from Ved Stranden, right in front of Christiansborg, all the way to the iconic statue of The Little Mermaid, floating past the most famous and architecturally-interesting buildings located along the waterfront (the Opera, Amalienborg Palace, The Black Diamond just to name a few). 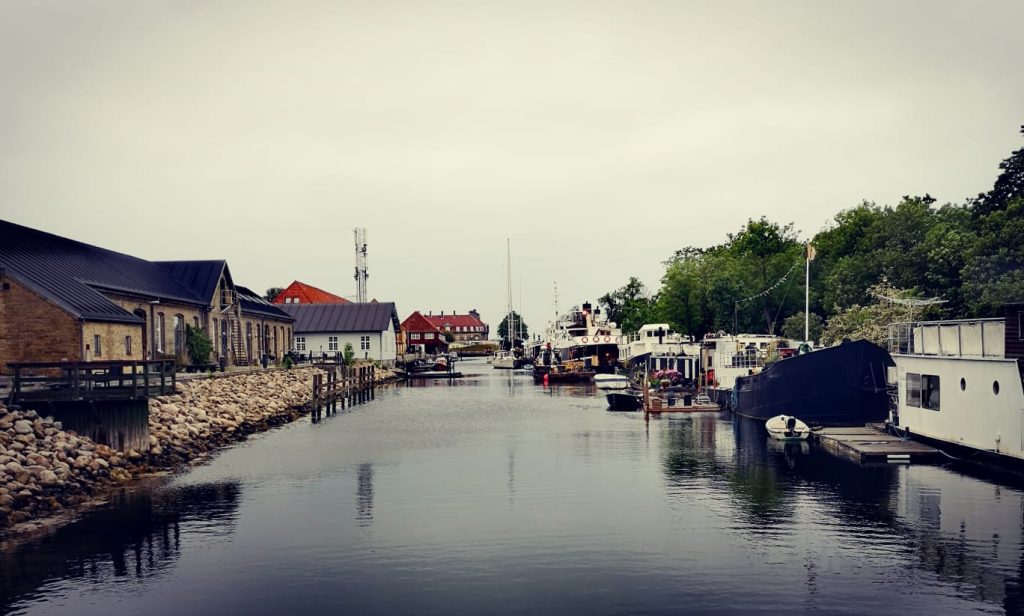 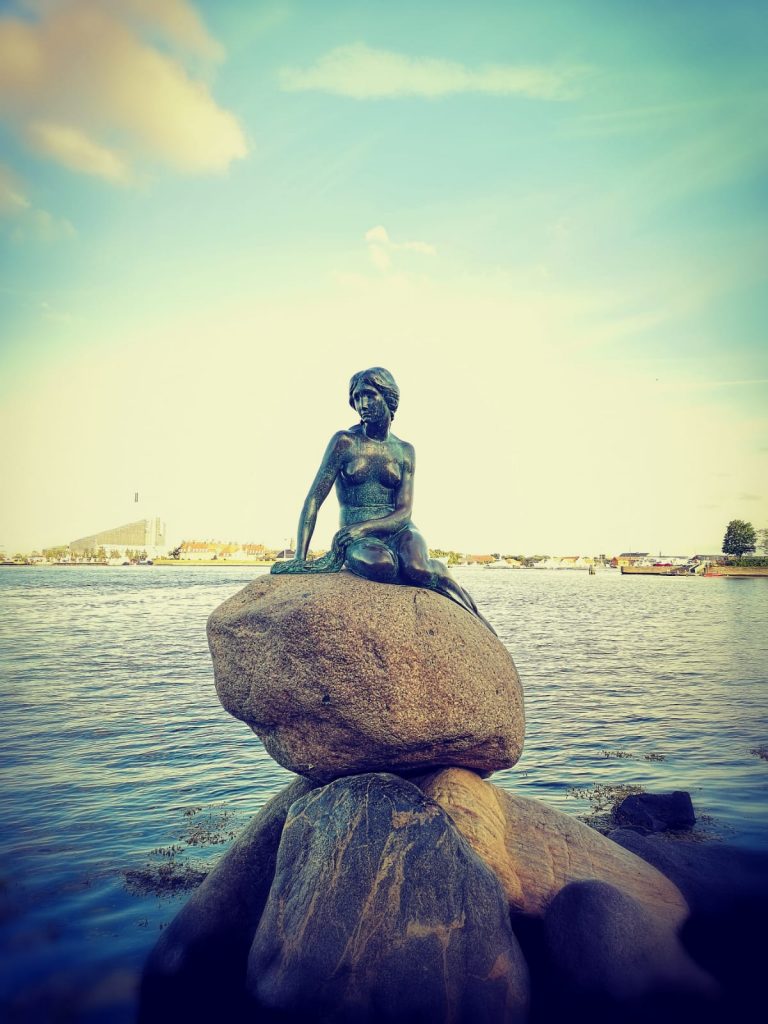 As the sun was still up and bright at 6pm, we decided to walk the waterfront ourselves and see the Little Mermaid from a frontal perspective; behind it is the star-shaped island of Kastellet, yet another fortress built by the Danish Kings. 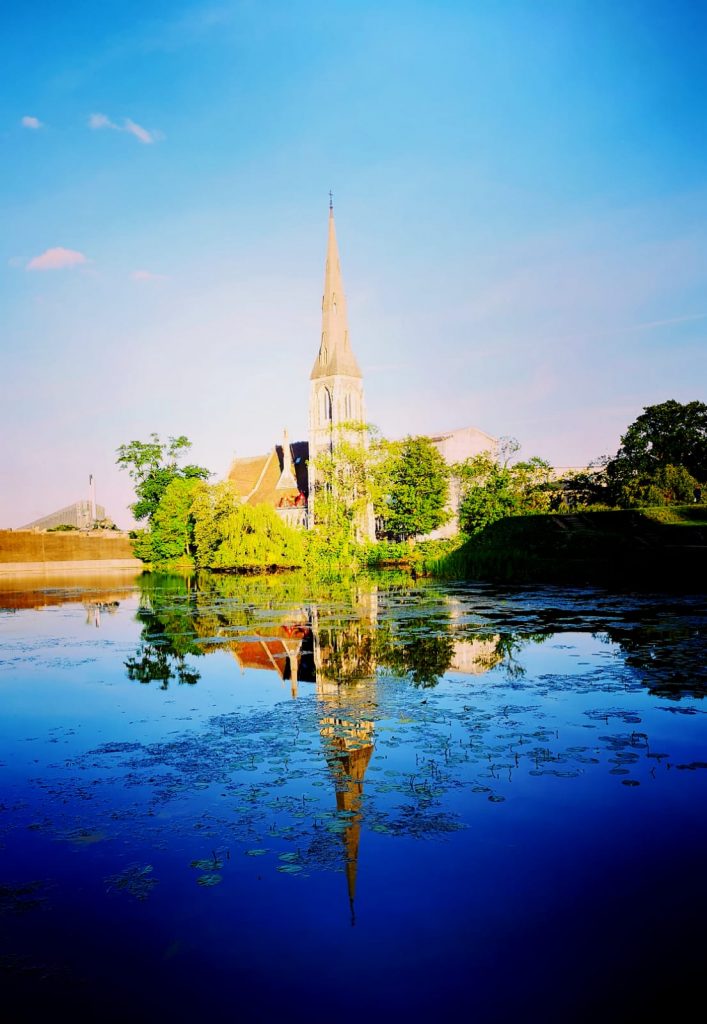 Our very last stop were the unmissable Tivoli Gardens. A colourful, fairytale-like amusement park located within the city, with many fun rides, an artificial lake, restaurants, market stalls, a theatre and a central stage where famous Danish and international artists perform almost all-year-round.

Prices: Free with the Copenhagen card. 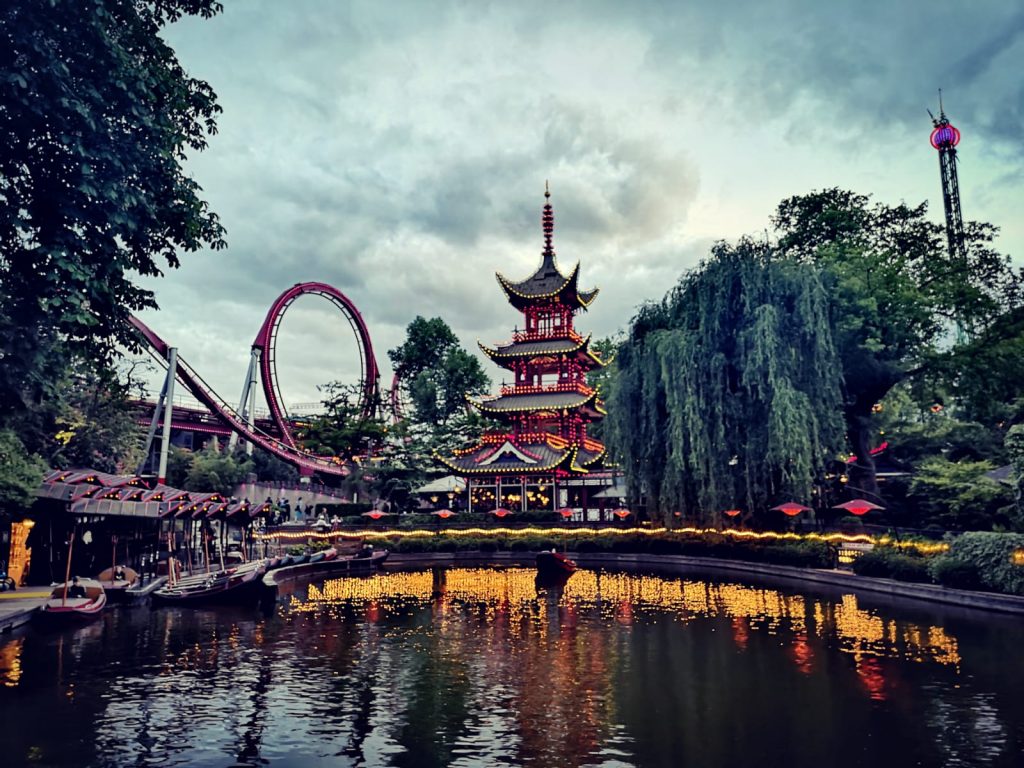 We had some very expensive although decent burgers at Cock’s & Cows inside the Tivoli Food Hall, located on the north-western corner of the park and flavoured popcorns from Tivoli Popcorn Factory.