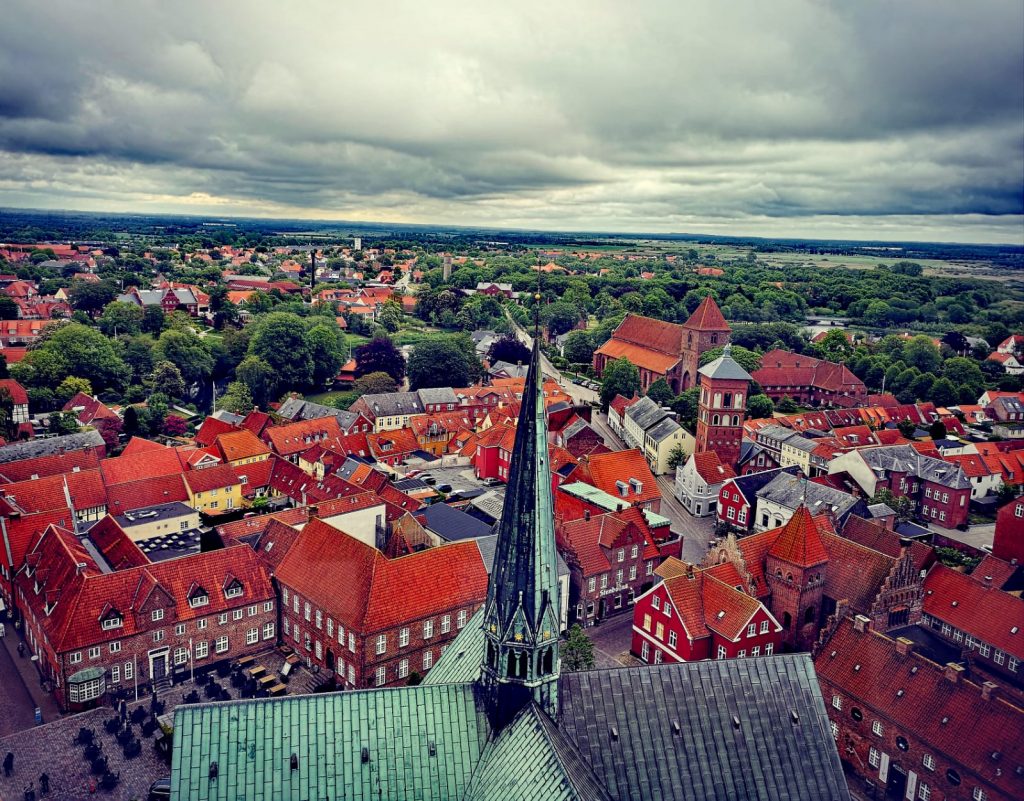 A rainy day made it impossible to do any sort of outdoors activity. We therefore relied on our rental car and first drove to Ribe. Here we visited Ribe Kunstmuseum (national gallery)

It features works by Danish painters from the 19th and 20th centuries. At the time of our visit, there was a special exhibition on artist Kristian Zahrtmann. Unfortunately info and captions were only available in Danish. The rear side garden offers a serene space to relax with wooden bridges crossing the placid river. 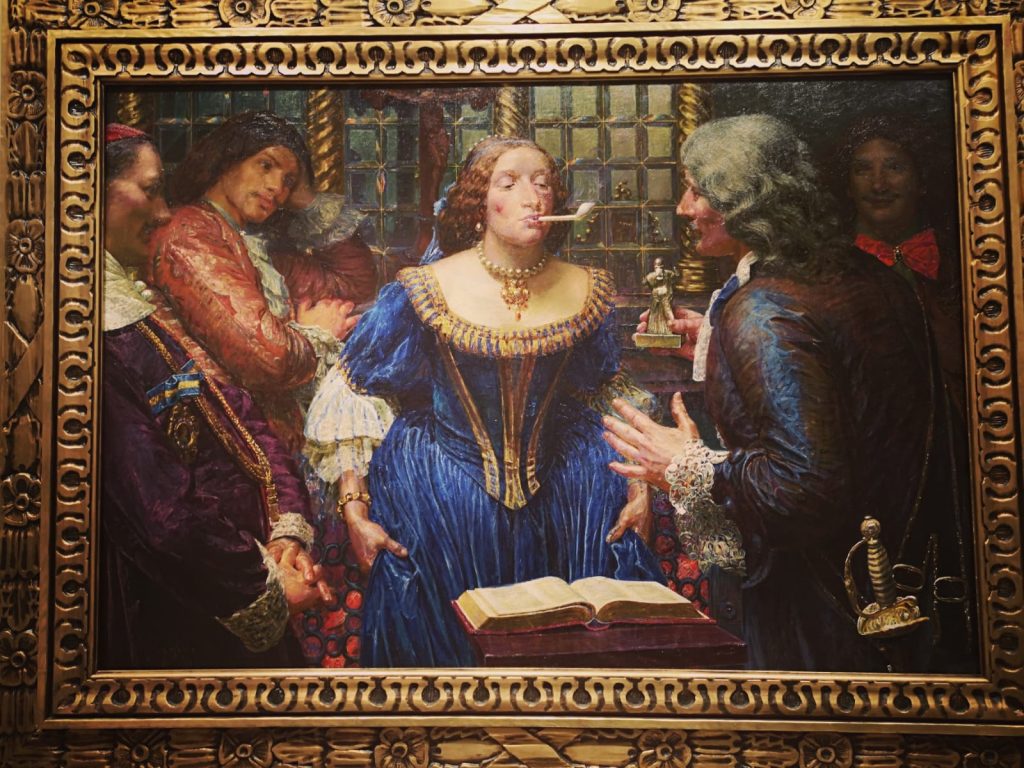 A short walk leads to the main market square (Torvet). Here we climbed up the tower of Ribe’s impressive cathedral (Ribe domkirke), dating approximately 10th century. It has been rebuilt and extended over the centuries and has also suffered a period of neglect as floods (the most dramatic one in 1634 reached six metres a.s.l.) and fires proved hard on the once-flourishing town. It retains now a five-nave structure. The small museum, accessible from the spiralling staircase that leads to the top of the tower, explains the various phases of construction and exhibits finds from excavations around the area. 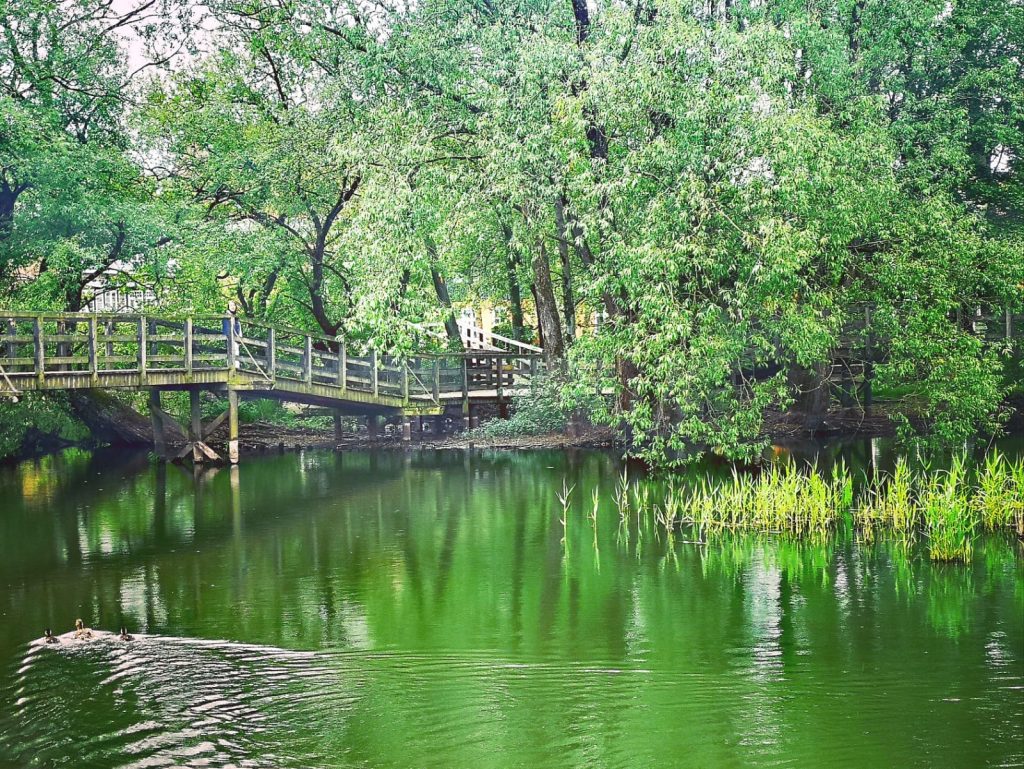 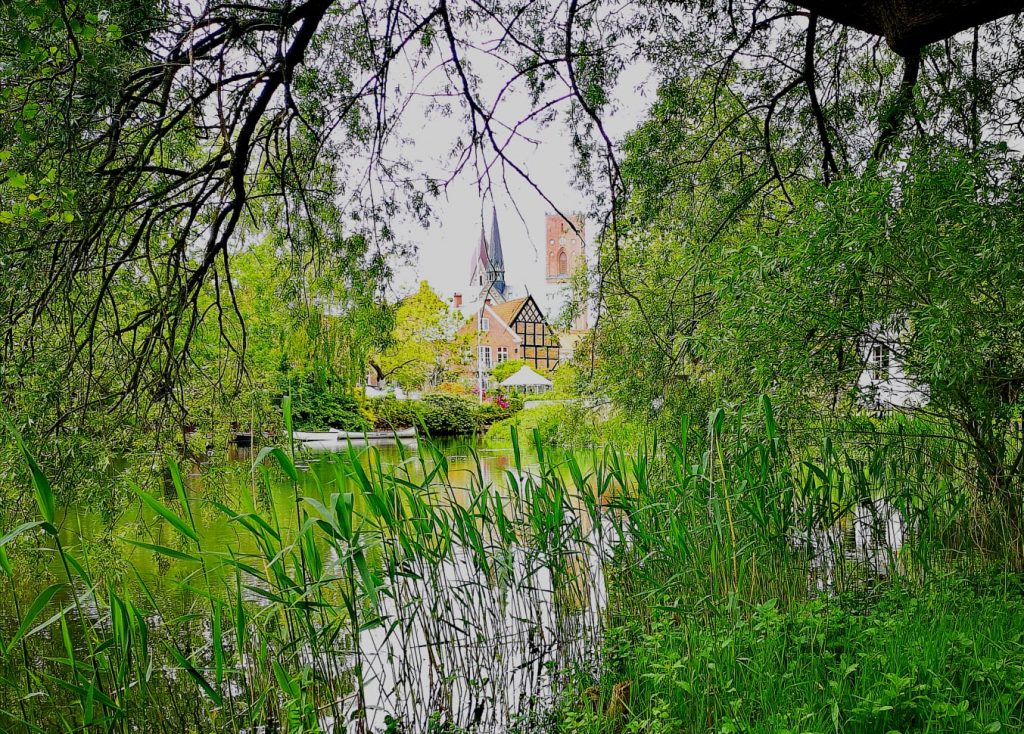 We wandered a little longer around postcard Ribe. We listened to the not-so-easy-on-the-ears sing of the starlings which are here in the thousands. These black-feathered birds are responsible for a natural spectacle called Sort Sol (Black Sun) when the birds flying in large flocks literally obscure the sun. We did not get to see it as it mainly occurs between March and April.

We bought some pastries from Raadhus Conditoriet: from the classic kanelsnaegle to the boller, a soft, round bun typical of the Scandinavian cuisine, and the Napoleonshatte, a shortcrust pastry shaped as Napoleon’s hat generously filled with marzipan and gently dipped in chocolate. Together with cardamom and cinnamon, marzipan is a staple ingredient in the Danish baking tradition. It’s said to have been invented in Lübeck, a city in the Schleswig–Holstein region, now in Germany but once part of the Danish kingdom who lost it to Bismark’s Prussia in 1866.

The island of Rømø– 40 km south of Ribe – was next. Here we stopped at a cosy café, Hattesgaard Cafe-Antik-Genbrug, full of artisanal objects. Every cup, lantern, cushion is for sale and it does not come cheap, as you can judge by the price tag. Hearty aromatic teas and home-made cakes were featured on the menu. 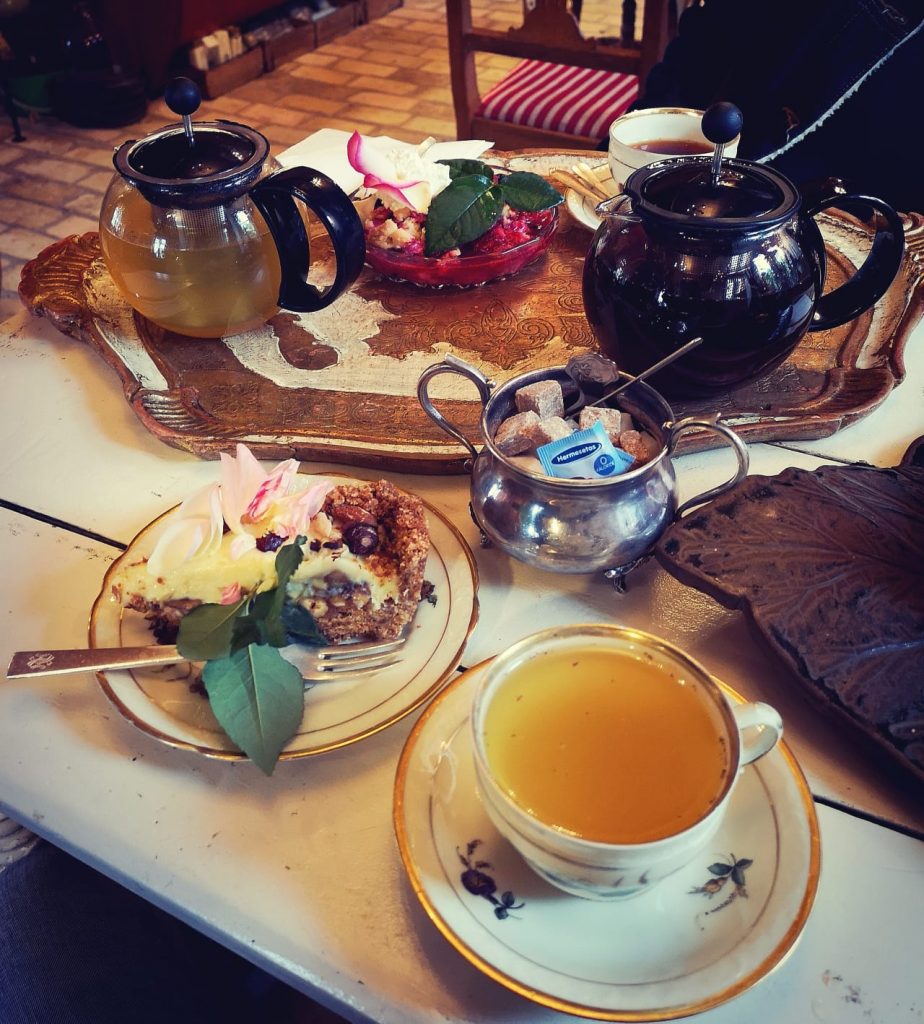 Rømø, together with Fanø and Mandø, is part of the Nationalpark Vadehavet – Wadden Sea National Park characterised by the low tides that uncover the seabed twice daily.

We would have liked to explore more of the island but the adverse weather conditions did not make it easy. We chose instead to drive southward to Møgeltønder, just four km from the German border, hence the abundance of German visitors in the region. The small village features Shackenborg Slot, a royal castle from the 17th century, a 12th-century church and a picturesque street (Slotsgaden) connecting the two with its cobblestones and red-brick and thatched-roof houses.
We could not visit the interior of the two main buildings as we were there after opening hours but we still enjoyed the view and the tranquillity of the surroundings. 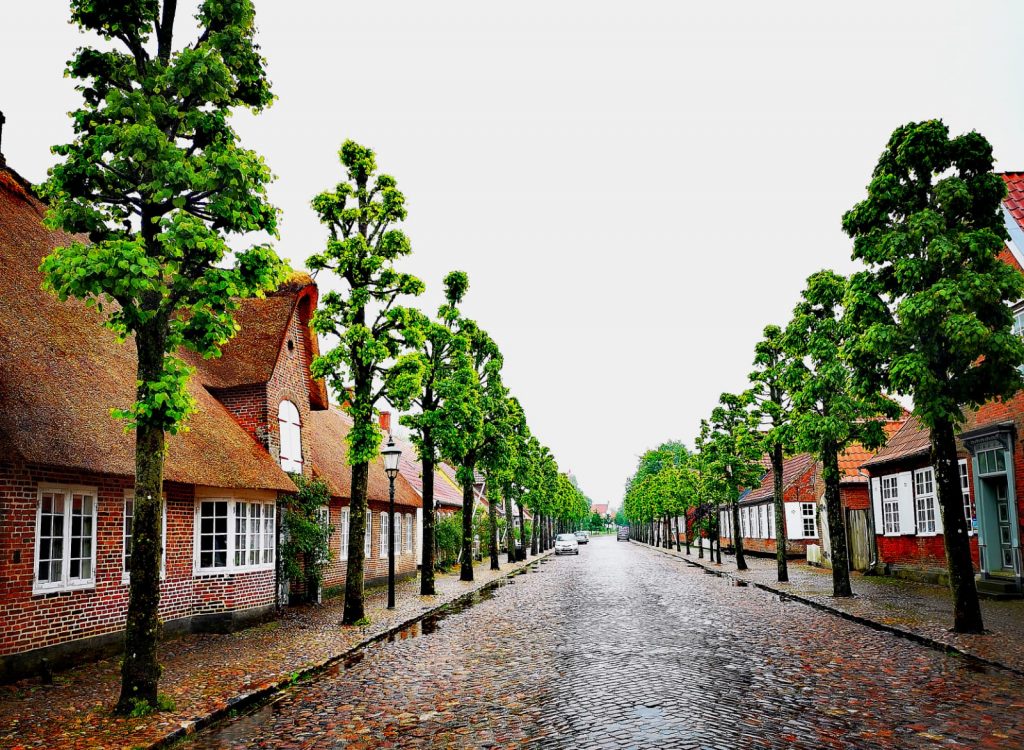 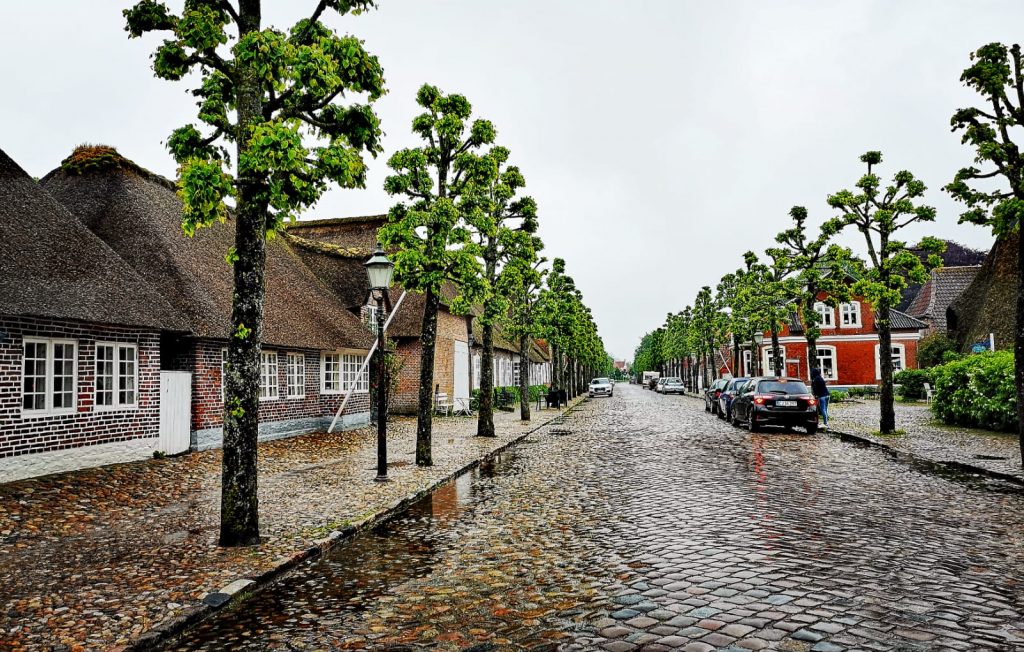